DNA To the Rescue!

Over the past several years I have been an active administrator of the Sproul DNA Project hosted by FamilyTreeDNA. The project had been dormant for several years with only a handful of members whom we all I believe were a little frustrated as we knew DNA could help solved our immigrant Sproul brick wall. Over a period of about two years and out of a handful we have now grown today to over 100 members and two additional administrators with exceptional capabilities, and we're growing all the time.

The problem for many of us Sprouls and particularly the Irish Sprouls, we all bottleneck in a relatively short period of time. Aside for a single case that we are aware of, Sprouls arrived in Ulster during the Plantation Period in 1622 and after. Many Sprouls, including my Thomas (emigrated c1754 to New Castle) emigrated to other parts of the world quite extensively from the early eighteenth century and throughout the nineteenth century. Not much stable Irish Sproul history for us to go on!

So the challenge was to find Irish testers in Northern Ireland that would be willing to donate a saliva sample to be Y-Chromosome tested (male only test) for the cause of the project. But just as importantly, they also needed to have solid documented knowledge of their lineage. It was a very slow go and for nearly a year we only had two Irish testers to work with. It wasn't until teaming up with Kate Tammemagi and a few moments of unbelievably good fortune when the floodgates of Irish Sproule men joined the cause.

It's been a few years now and quite a ride, but my suspicions about Thomas emigrating from Ireland to New Castle appear to be correct. With the help of Y-Chromosome DNA analysis between myself and the other Sproule men in Northern Ireland and the help of fellow Sproule researcher Kate Tammemagi, it has been determined my Thomas emigrated from Tullymoan, Urney Parish, County Tyrone.

To be clear, this was a group effort based on many years of research by Kate but could never have been proven without other Sproule testers in Northern Ireland. There is still much more research to do with the Tullymoan Sproules (Spreull was the spelling in early Tullymoan) to determine who were Thomas' parents. This question may never be answered but we can be confident that Thomas did indeed come from Tullymoan!


Who were the Tullymoan Spreulls/Sproules? To get the full story you have to go to Kate's blog to appreciate the history behind this particular line of Sprouls. But as it turns out Tullymoan was settled by James Spreull, Jr., son of James Spreull of Cowden, Scotland in 1622. The amazing thing is Sproules still live and work on the Tullymoan farm to this day!

If you are here because you are researching a Sproul relative or ancestor, no matter the variant of the spelling you really need to join the Sproul DNA project. With that said, DNA is only half the battle as is developing a solid, well documented and sourced paper trail. These are two halves that must work together and support one-another if you want to demolish that brick wall.

Now that I've put some time and knowledge into this project, and wrapping my head around the amazing work Kate and others have done, I have come to the conclusion you really cannot accurately pin down your ancestors without a doubt unless you are collaborating with someone in this project. It seems like we are uncovering a new branch of Sprouls almost monthly. I look at old message board posts on the internet, mine included and think 'wow, was I ever off base.'

We have members from Ireland, USA, Canada, England, New Zealand and Australia. I'm sure over time Sprouls from other corners of the globe will find the Sproul DNA project as well. We are one big family descended from Walter Spreul of Dumbartonshire, Scotland circa 1285. Join the Sproul project and find out which limb of the Sproul tree your family resides. Are you of the Irish Plantation Period Sproules? Did your ancestor emigrate directly from Scotland?? Join us and see who you might match up with and get started collaborating with them. We would love to have you!

If you suspect that you are descended from Thomas of New Castle or the Tullymoan Spreulls, or any other Sproules for that matter please send me an email and/or comment to this post and I'll get back to you as quickly as possible.
Posted by Joe Sprowl at 6:51 AM 1 comment:

The earliest beginnings of the New Castle, Delaware Sprowl family in colonial America seems to have begun with Thomas Sproul. Thomas' name is listed in the Pennsylvania Gazette dated 1 Jul 1756 as having a letter waiting at the Philadelphia post office. It also mentions Thomas residing in New Castle. 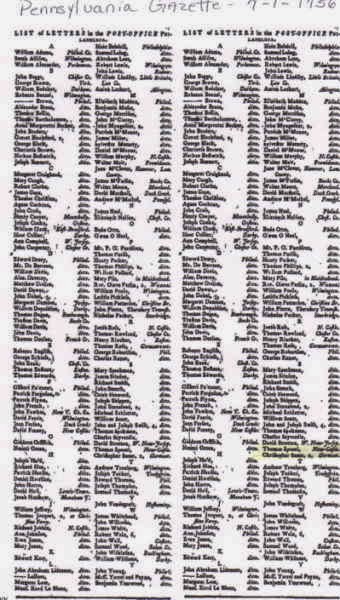 On the 1757 Delaware Militia roster of New Castle County, Delaware Thomas is listed as a private in Richard McWilliam's Company of Foot. 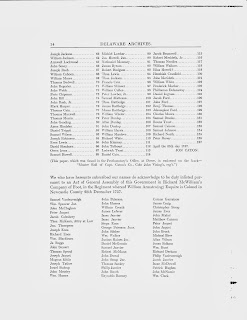 Thomas appears to have had a quiet, uneventful life as a carpenter until 12 Nov 1761 when he files a marriage bann announcing his intentions to marry Sarah Rea, widow. Sarah's (nee: Parker) first marriage was to Robert Rea. This marriage is recorded in the Old Swede's marriage records for 1 Apr 1748. Further research needs to be conducted on this family. It is not known the cause of Robert's death or if he had left behind any issue. 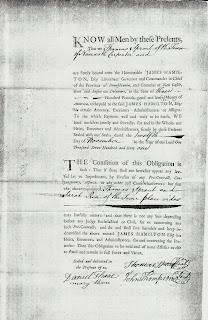 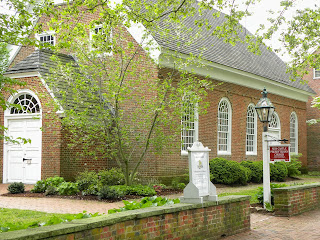 John Thompson, yeoman, was surety for the marriage bann.

Although Thomas seems to have lived his entire adult life in the city of New Castle, a curious announcement appeared in the Delaware and Eastern Shore Advertiser newspaper, 6 May, 1795;

So reading this it appears Thomas not only owned property in Middletown, some 21 miles to the southwest of New Castle town, but he also died by 6 May 1795. It's important to note that Middletown was becoming a very important and strategic town as it was the "middle town" between the Delaware coast and the Chesapeake Bay. Much commerce was exchanged through this route. The property may have been an investment opportunity, who knows, but no record of him ever living there or belonging to the Forest Presbyterian Church has surfaced.

It has always been understood that this particular line of Sprowls are Scotch-Irish. What that meant to me as a child was an incredible mystery. As an adult with twenty plus years of research, it brings amazement to the durability and ingenuity of this incredible race of people. I remember growing up listening to many family sessions of story telling. Some stories substantiated, some inflated and well, lets just call the rest creative embellishment.

Thomas has been a frustration for many years. His origins are elusive but with the occasion chip at the wall and slight glimmer of hope from time to time I believe his story will come full circle. I believe instinctively that he is the Irish emigrant of our family. The documentation to prove it is tantalizingly close. I'm hoping someone out there has the wrecking ball to finally break down his brick wall so we can all appreciate his story.

Posted by Joe Sprowl at 3:10 PM No comments:

Joe Sprowl
My name is Joe Sprowl. I have been my family's historian for over twenty-five years. I began my Sprowl research at the LDS Family History Center in Pocatello, Idaho before the internet simplified research. I'm also researching the Irish Famine periods and the Scotch-Irish migrations of colonial America. I have an extensive genealogical library that covers colonial Maryland, Delaware, New Jersey, and New England so let me know if I can be of any help. I have recently taken over (6/2017) the administrator duties of the Sproul Project group at FTDNA. I have recognized that genealogical research has evolved in a way where DNA testing is as important to your research as anything. It adds credibility and confidence to our reseach and can be monumental when trying to bust through those ever menacing brick walls!